The immediate developments after the Spanish municipal elections of May were so exciting -- and they continue -- that I have not blogged any of the specific action related to this blog. The text by Xavi Martínez and friends from the Ateneu Candela in Terrassa posted here June 9th was exemplary. He's a social center activist who has been elected to that city's council, and that text translation explains what he believes the squatting movement can bring to the new left municipal governances in Spain. That's exciting, and directly in line with a primary intention of this project ("Occupations & Properties," and the related zine "House Magic"), to enlarge and extend the subterranean currents that connect self-organized political and cultural action and mainstream center stage "obedient" politics and culture. And it goes on apace in Spain. (Updates, analyses and reflections can be had on the website of the Spanish fortnightly Diagonal.
Even so, apart from these kinds of reposts this blog has been quiet. But the spring and early summer have not. This is squatting season, and this writer has been worn out by all the action. I've put down my public pen in favor of brief spits and squibs of Facebook and Twitter. 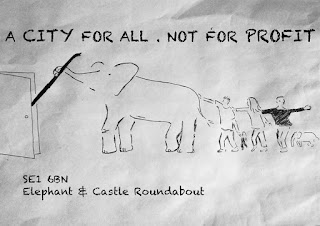 What I've neglected to report has been the substantial action behind squatting research these past several weeks. The SqEK conference in Barcelona concluded in later May, leaving behind a multi-lingual website that should slowly be accreting video records of the conference papers, including on economic self-organization, centered around occupied factories in Greece and agricultural towns in rural Spain. Conferees toured the neighborhoods of Barcelona, visiting squatted banks and communes. Immediately thereafter, I prepared for a visit to the USA to talk about my book and the anthology we printed for the SqEK conference called Making Room. (That was part of the Movokeur research project, a primarily statistical comparison of squatting movements in a handful of large European cities, which came to an end this year; the surface of that work was barely scratched.)
The distribution problems with that book, and my own Occupation Culture, have only recently been sorted out. Both are available in hard copy form in Europe, and in free downloadable PDFs, at the site of the publishers -- that's Minor Compositions for Occupation Culture, and Journal of Aesthetics & Protest for Making Room (also at La Central for the latter). (As my tour comes together, a website is in development; there is an "ad hoc" tour page on the "House Magic" website, which is a mirror site for both book PDFs.)
My book Occupation Culture is a fruitcake of information about squatting, social centers, and the many currents, both activist and cultural, that run through them. A lot of it came from this very blog. The Making Room anthology is an important book, the first gathering of texts from activists of the movement writing of disobedient culture across Europe in its many aspects. Again, it's a useful tool for those who argue that the innovations social movements have made in hacking back commonses from the sordid tsunami of privatization should be adapted by governance.
Meanwhile, I have been on the road...

... starting with A Tour of England, during which I saw The Cruel Work of "Revitalization" in Southwark, London.
One might think the way to re-develop a low-rise working class and immigrant neighborhood close to the center of an expanding global city would be to devise a solution that preserves as much as possible of the social fabric and historic institutions of the existing communities while at the same time making generous provision for the arising of new ones. In some ideal utopia of reason and functional democracy this might be the way to approach the problem. But those imaginary happy folk don't live in London, nor would their rulers be thinking like the English barons of capital.
The district of Southwark is now suffering a new Norman invasion. Years of careful circling of the Elephant and Castle area, some preliminary probes to plant high rise housing near the thundering roundabout, and a long series of sellouts by the local chieftains have prepared the way. Now the historic housing estates, which are vast, carefully planned wending series of low-rise houses with courtyards and playgrounds, designed as architectural reefs for a vibrant and tranquil community life, are soon to be levelled. The projects are called "revitalization."
"I cut down your generations like grass," bragged an ancient Assyrian king on his stele. Then new peoples will move in, who have no idea what existed there before them. "Oven-ready" from the universities, as one government education advisor recently put it, happy for a place in the great global project of London. They will don their plastic suits and march off to the labor of carrying on the consensual madness of the day. 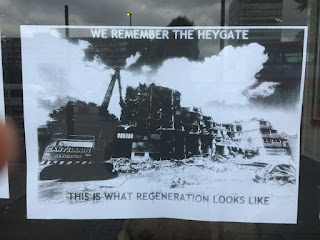 The grand harbinger of all this -- the great steaming pile of skulls on the horse-swept plain, the far-distant fire now an inferno close by-- was the demolition of the monstrous high-rise Heygate Estate. This place fell into social pathology, was effectively demonized, and in the end cleared of inhabitants and demolished. Now there's a complex of "pop-up" shops in a pile of shipping containers called "Elephant Artspace" where there used to be a community ball field. (Dan Hancox nailed this trend among developers in February '14 in an excellent text called "Fuck Your Pop-Up Shops.")
Now it is being "revitalized." Over a period of years all the trees between the classic modernist housing towers will be cut down, and high-priced condominium apartments will be built for the new workers of London. Like most war refugees, the displaced tenants just want to go somewhere they can be safe from the raging tornado of the luxury city. Right of return to the old lands? Oh, sure, you can come back. Show us the contents of your wallet. 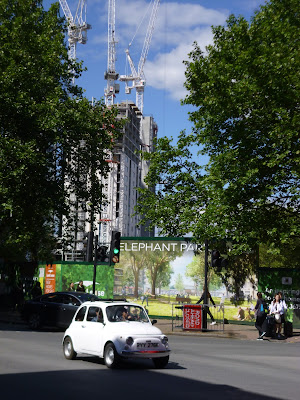 "Elephant Park" luxury housing under construction in Southwark, May 2015

Opposing these dicta, these deals already done, are the communities themselves. As they show their ID cards to enter their former homes, now put under the sign of erasure with security cordons patrolled by contract employees, they hold their meetings, put up flyers around a coffee shop here and there. And surely, they are hoping for the best outcome for themselves and their families. Which can only be a nice relocation at the same rent, right?
And now, to join them, comes the London Southwark childrens' crusade. A vacant pub in the Elephant and Castle roundabout has been squatted. The long countertop which saw a million pints is now covered with scavenged vegetables. A squatters' assembly is debating whether alcohol should be allowed inside what they have dubbed a "social center." (The scars of the homeless, mad and alcoholic peoples' siege of Occupy London are deep.)
I popped in to the squatted pub with x-Chris of 56A infoshop. He was wearing a t-shirt from the defense of a skatepark a few years ago. The boy who met us at the door, opening the impromptu chain lock, had the same emblem tattooed on his chest. I'd met x-Chris an hour before at the 56A Infoshop where he works.
56A is both tiny and immense. It is truly cozy -- four, maybe five people can sit in the main room -- because the place is stuffed. The walls are lined with open boxes stuffed with zines and short-run newsletters and magazines. There are rows of books, some for sale and others for browsing. Turning carousels have single zine copies displayed. Everything in those rooms is very close -- it is truly a box for reading, with every lump of knowledge close to its fellows. It becomes impossible not to think continuously of relations between one and another struggle, between the instant we are living, some years gone by, and the deeper currents of the radical past. I was so tired all I could see this time was a blur of colors and a jumble of words, but I knew where I was, inside a special kind of machine of knowledge. But it's not just knowledge. 56A is at the heart of real-life present-day squatter resistance in Southwark. People network new actions out of there. 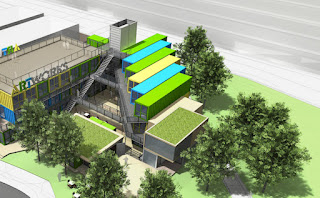 "Elephant Artspace" architectural rendering; the trees in this image are the artist's fantasy
I waited with some folks, and finally x-Chris arrived. He had come from a meeting, and he stood in the door, seeming somehow a little stunned, or uncertain. The council has just offered 56A a 15-year lease extension at a charming rent. "Why?" he wondered.
Later, in the the newly-squatted Elephant and Castle social center x-Chris cast a wistful eye over the literature table. "In days past I'd have grabbed all this for the archive," he said. Each of these spreads, these tables of flyers, stickers, pamphlets, zines and newspapers, are snapshots of the political and cultural concerns of a resistant community at a given moment, when their resolve has steeled to direct action, and a space has been opened to share these particular words, images, messages.
The Elephant and Castle pub squat was full of small colored cards in many different languages and their scripts, with advice what to do if the English immigration police accost you. Not many immigrants are going to wander into a squat that is undoubtedly under constant surveillance, and threat of invasion and arrest by angry police. The cops were surely angry because one of their recent raids in the neighborhood to snatch up papers-less migrants had been thwarted by an angry crowd of citizens. A lot of the talk at 56A revolved around this action -- who was in jail, who was out, the status of their cases before the courts, the photos of the action which had faces blurred, the police circulating enlargements of the first photos with faces clear...
TO BE CONTINUED