Can Vies: The Reason of Force in the Barcelona Police 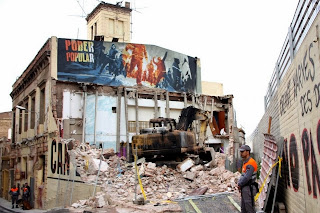 from Revue Argelaga, translated by NOT BORED!

NOTES
1 Originally written in Catalan and published by Revue Argelaga under the title “Can Vies: la raó de la força a la Barcelona Policial” on 28 May 2014 (http://argelaga.wordpress.com/2014/05/28/can-vies-la-rao-de-la-forca-a-labarcelona-policial/). Published in French by Paroles des Jours (http://parolesdesjours.free.fr/antiindustrialisme.pdf) as “Can Vies: La raison de la force dans la Barcelone policière.” Translated from the French (with recourse to the Catalan original when necessary) by NOT BORED! 10 June 2014. All footnotes by NOT BORED!

2 A squatted and self-managed social center, Can Vies was founded in 1997. Ostensibly owned by Barcelona’s transportation authority, the building was evicted and demolition of it began on 26 May 2014. These were actions that touched off three consecutive nights of protest and rioting, not only in Barcelona, but in other cities as well.

4 The Mossos d'Esquadra (“squad lads”) are the police force in Catalan.