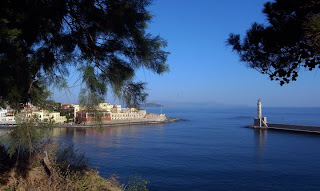 A View from a Squat -- as seen from Rosa Nera square...
Afterwards an anniversary feast for 500 guests is spread in the square (500 real plates!) while local musicians play and sing, sing and play. We sit at one of the long tables, drinking local wine and eating lamb, risotto, and salad from plastic--rather than china--plates. How did that happen?
The only Americans in attendance, we talk for some time to an Athenian woman in her early thirties, who describes being among the half-million protesting the imposition of anti-austerity measures for five long hours in front of Parliament (“five hours, 500,000 people,” she repeats, more than once) a few months earlier--and then Parliament went right ahead and voted against the people. She speaks as if she still can’t believe what happened. “And then when the police attacked it was the anarchists that defended us,” she says. She’s been in Crete for three months now, in quiet retreat while mulling over what to do next. She’d quit her academic job. When Sherry says what an inspiration Greek resistance has been--and still is--to so many in the U.S. it isn’t clear that she believes or perhaps even quite hears what Sherry is getting at. In the present context -- in the midst of the lively communal celebration of eight years of unbending resistance going on around us—her somewhat unyielding expression of a doubt which surely everyone feels at times is disconcerting. But I wonder if there is anything more inevitable—given enough time, a stumble, a route or a rupture -- than such occasional rumbles of doubt. Late the next morning the musicians are still playing, still singing, with only slightly less energy, even though their audience has dwindled to a handful of diehards and sleepy-eyed insomniacs. The persistent tradition of folk melody, songs of work and desire that everybody knows and shares, among its many other benefits can be an effective salve for the lingering psychic scrapes doubt exacts.
A few days later, when we’re back in Thessaloniki, 34 anarchists, whose cell phones have been tapped for months, are arrested on felony charges of belonging to a criminal organization. In the past few months, fascists have attacked immigrants dozens, perhaps hundreds, of times. No arrests. Syriza had promised, if it won the election, to purge the police force of its fascist elements. It is well-known that the police are heavily involved (perhaps to the tune of 50%) in Golden Dawn, the fascist party that garnered 7% of the official vote count.
A few months ago, New York’s Mayor Bloomberg boasted: “I have my own private army,” a bloated statement reminiscent to some of the early stages of fascist consolidation of power. But of course it’s silly to imagine that this billionaire mayor, who had the law limiting the election of a mayor to two terms changed when he decided that he wanted to be Mayor-General for the third time, whose private army purged Zuccotti Park of the Occupy Movement, when, tiring of its excess, he so ordered, should be mentioned in the same breath with any of the tinpot fascists who rose to power, way back in the second and third decades of the last century. And maybe that’s correct: people here in Greece are beginning to speak of a molecular fascism, built from the ground up, which is not indebted for its increasing influence to the skillful demagoguery of a charismatic leader. And no one in their right mind ever accused Bloomberg of being charismatic.
– Ernie Larsen, August 2012
Posted by Alan W. Moore at 8:04 PM