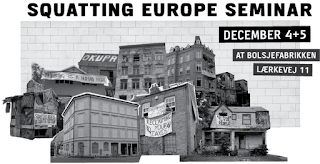 Made it to Copenhagen for the SQEK conference (SQuatting Europe Kollective). We all stayed in collective houses, and met at the Candy Factory (Bolsjefabrikken) thanks to our hosts' careful arrangements. (I was at Molevitten, which Google says means “shebang”!) The last days we toured squat-like artists' projects. One big question last week was, what is the relation between squatting and occupying? Miguel Martinez tried to answer for Madrid. He had arrived in Copenhagen early, and gave his paper to an academic gathering at the University of Copenhagen. Since this will doubtless interest the academic readers of this blog, I reproduce his abstract below. My notes on the conference will appear in a subsequent post. (The raw notes are posted already on the “House Magic: Bureau of Foreign Correspondence” website.)
“Cumulative Chains of Activist Exchanges: the Occupation of Squares and the Squatting of Buildings,” abstract of a paper by Miguel A. Martínez (Universidad Complutense de Madrid) and Ángela García (Universidad Complutense de Madrid) The M15 [May 15th, 2011] movement in Spain (Taibo 2011) has responded to the financial crisis and the neoliberal policies [of the Spanish government] (López and Rodríguez 2011) with a sudden and profound social mobilisation during seven months (May-December 2011). While it is based on previous movements (alter-global 1994-2002, anti-war 2003, anti-conservative government M14 2004, and pro-housing 2006-2010), this is the first time that a precarious multitude (Mudu 2009) takes the squares, the streets and the neighbourhoods for such a long lasting period, through an innovative autonomous organisation and with a transnational scope (Tarrow 2005).
This paper focuses on the convergence experienced by the squatters' movement (Adell et al. 2004, Domínguez et al. 2010) and the M15 movement. We will describe first how and why squatters joined the M15 movement. Then we will provide evidence about the utilitarian role that already existed squatted social centres played in the M15 movement. Finally, after the camps were evicted, an explosion of new squats took place due to the initiatives of new activists of the M15 movement.
Our explanation of this process of convergence rests mainly in the 'cumulative chains of activist exchanges' since the three mentioned aspects of the process reinforced each other. The structural equivalence of the occupied camps and the squatted social centres (in terms of assemblies, self-management and social disobedience), sparked the mutual collaboration. Camps also turned into strategic ends (examples of direct democracy: Graeber 2011, Taibo 2011) of the M15 movement beyond its original function as a powerful repertoire of protest (Marcuse 2011), in a similar mood as squatted social centres tend to be performed (Pruijt 2003). Squatting gained legitimacy within the M15 movement due to the initial collaboration as well as to the increasing success of the campaign Stop Foreclosures. The M15 movement encouraged new activists to self-organise in many different groups: some of them went to work in preexisting squatted social centres while some others started to squat houses and social centres. On the one hand, this mixture slightly reduced the radical and anti-systemic discourse of squatting. On the other, the anti-speculation discourse was incorporated into an anti-crisis one where squatting was justified by the extreme needs of increasing numbers of the population.
The impressive wave of new squats opened between September and November, 2011, also took advantage of political opportunity structures (McAdam 2001, Meyer 2004): low level of repression and temporary divide (and de-legitimation) of power elites around the [eve of the national elections] (November 20th), in particular. Since January 2011 the international context of European and North African uprisings (and political and economic crisis as well) had an effect of demonstration and contamination to which internet networks contributed with instant and plural communication. This communicative environment was also developed by the M15 movement through their own cybernetic means and platforms thus allowing the new mobilised multitude to frame the continuous grievances that emerged during these seven months (repression, evictions, cuts in public services, reform of the Constitution in order to pay national debts, etc.). The camps, the popular assemblies and the squats had the virtue of getting people in touch regularly, so that the self-organisation and agency of groups had a reliable socio-spatial ground in which urban life based on collective and private consumption (Castells 1983, Nicholls 2010) was challenged by a hybrid of urban and macro-political movement.
The empirical information for this research comes from our own participant observation in most of the events of this period in the city of Madrid, but we also analysed media documents, alternative media news and messages which were spread through Internet platforms (weblogs, Facebook, Twitter and Youtube). The main source in order to [context] and contrast our data, were 21 semi-structured interviews that we [conducted with] squatters and M15 activists.
Adell, Ramón; Martínez, Miguel (eds.) ¿Dónde están las llaves? El movimiento okupa: prácticas y contextos sociales. Madrid: La Catarata.
Castells, Manuel (1983) The City and the Grassroots. A Cross-Cultural Theory of Urban Social Movements. Berkeley: University of California Press.
Domínguez, Mario; Martínez, Miguel; Lorenzi, Elísabeth (2010) Okupaciones en movimiento. Derivas, estrategias y prácticas. Madrid: Tierra de Nadie.
Graeber, David (2011) Occupy and Anarchism's Gift of Democracy. [http://www.guardian.co.uk/commentisfree/cifamerica/2011/nov/15/occupy-anarchism-gift-democracy?newsfeed=true]
López, Isidro; Rodríguez, Emanuel (2011) The Spanish Model. New Left Review 69.
Marcuse, Peter (2011) The purpose of the Occupation Movement and the danger of fetishizing space. [http://pmarcuse.wordpress.com/2011/11/15/the-purpose-of-the-occupation-movement-and-the-danger-of-fetishizing-space/]
Mcadam Dough; Tarrow Sidney; Tilly Charles (2001) Dynamics of Contention. Cambridge: Cambridge University Press.
Meyer, David S. (2004) Protest and Political Opportunities. Annual Review of Sociology 30:125–45.
Mudu, Pierpaolo (2009) Where is Hardt and Negri's Multitude? Real Networks in Open Spaces. ACME: An International E-Journal for Critical Geographies 8(2), 211-244.
Nicholls, Walter J. (2010) The Los Angeles School: Difference, Politics, City. International Journal of Urban and Regional Research 35-1, 189-206.
Pruijt, Hans (2003) Is the institutionalisation of urban movements inevitable? A comparison of the opportunities for sustained squatting in New York City and Amsterdam. International Journal of Urban and Regional Research 27, 133-157.
Taibo, Carlos (2011) El 15-M en sesenta preguntas. Madrid: Los libros de la Catarata.
Tarrow, Sidney (2005) The New Transnational Activism. New York: Cambridge University.
Posted by Alan W. Moore at 9:37 AM