Hanging Out: That's What It's About 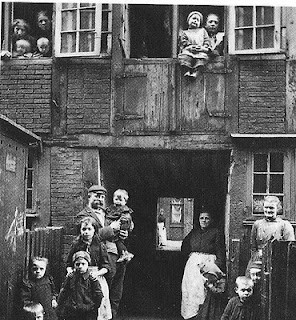 I've been abandoned by my host in Hamburg – something about a birthday party in the countryside... He rode a horse for the first time. So I wander down to the Gängeviertel, an artists' occupation in Hamburg Mitte (central city). I've blogged this place before, on my summertime research visit here last year. It was occupied in '09 by artists who already had studios in this crumbling complex of low-rise buildings. It's a block of 19th century workers' housing, very quirky architecture. (That's the photo, ca. 1900, above.) In the past it was nothing special – but now it is. It's the last of its kind in central Hamburg. Yesterday it was lunchtime, and everything was closed. There's nowhere down there to eat. The workers on the giant building projects which ring the Gängeviertel are gobbling lunch in a tiny takeout sandwich shop. By now I really have to pee, and face the prospect of choosing a place to eat simply because it has a toilet. (Ah, age...) But at the Gängeviertel I find a high-mounted compost toilet! Perfect – it's a feminist project; I'm not exactly sure how or why... some fool pissed in the sawdust anyhow.
I find a nice lunch special up the street at Happi Sushi, a family run shop very unlike the main run of office worker takeout joints. Upon returning I find Regina opening her shop at the Gängeviertel. It's full of artists' works very low-priced, postcards, etc. – souvenirs of the artists' complex. Regina is an old-time San Francisco squatter who's been in Hamburg for 15 years. In the bay area, she worked with Rene Castro and Project Artaud. (Dunnno about anything about that, but the name is right by me; I love Antonin.) Contrary to what we thought when we were doing our show there last week, it turns out Rote Flora had an “art club” upstairs 10 years ago. It's been forgotten by present users. (Later I'm told it was more like a bar, with drinks and sketching, and it moved out.)
We are chatting and along comes C., a guy I met last year who loves the Gängeviertel. He's into a jazz festival in Morocco, a charming guy who's lived an adventurous life as a “permanent beginner.” We have a coffee, and he tells me stories of sailing on the Mediterranean, eating crab with ganja pancakes... the cafe smells of hashish. It's the place where you can lose your whole day... Regina and C. tell me about an art circus that passed through here from Lisbon on its way to Paris – “Arte Ocupa.” Things could really get rolling, if I can hook up with those guys. Now I am packing packing for Paris. Popped by Frise artists' house in Altona where I stayed in the summer to say hello to Sabine Mohre, my host then. She says Gängeviertel may get the chance to buy their squat – in Hamburg, that's how they say “we love you.”