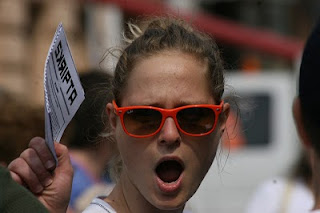 How long have I been asleep? The always excellent "news" at eipcp.net points to the impressive "Occupation Cookbook" produced in Zagreb, now online at slobodnifilozofski.org/?p=1915. Based on experiences in spring 2009, "The Occupation Cookbook or the Model of the Occupation of the Faculty of Humanities and Social Sciences in Zagreb" contains practical descriptions spiced with some theory of the way to organize the change we want to see.
They write, "The Occupation Cookbook is a 'manual' that describes the organization of the student occupation of the Faculty of Humanities and Social Sciences that took
place in the spring of 2009 and lasted for 35 days. It was written for two reasons: to record what happened, and to present the particular organization of this action in such a way that it may be of use to other activists and members of various collectives if they decide to undertake a similar action. "The Cookbook" is currently being translated into several languages. At the moment, all but the final few chapters have been translated into English, and the Introduction has been translated into Spanish. (Although it seems also a German version is available.)
The website slobodnifilozofski.org has many texts, videos and photos, as well as links to other movements in Croatia and beyond.
Contents of the Cookbook:
Foreword by Boris Buden; Introduction
The Organization of Student Control at the Faculty of Humanities and Social Sciences
How to Organize a Plenum?; The Plenum; The Rules and Guidelines of the FHSS Plenum
Code of Conduct During the Student Control Over the Faculty of Humanities and Social Sciences
The Plenum Minutes; Delegates and mandates
The Media Strategy, the Media Team and the Media Working Group
The Operational Tasks, Logistics and Security Team
The Program and the Program Team
The Inter-Plenary Working Group; The Plenum Technical Issues Working Group
The Document Analysis Working Group
The Mini-Actions Working Group
The Working Group for Spreading Direct Democracy
The Blog/Portal and the Blog Team
While it may seem a little socialist-technical (it is after all sort of dedicated to Lenin), this is an admirably coherent attempt to synthesize a code for successful peoples' action in the school.
Avanti!
Photo by: Damir Gamulin of “5 do 12″ (”The Eleventh Hour”) mini action in Zagreb city square.
Posted by Alan W. Moore at 4:21 AM