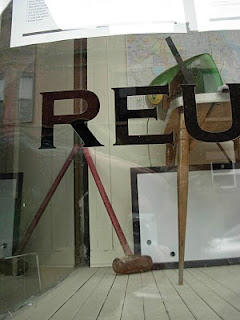 I am writing in the palatial Hostel International in Chicago,and the annual College Art Association conference is over. This is a great city, but the conference was strange. It is, as always, a heterodox assembly of artists and art historians, from the reddest revolutionary (intellectual, to be sure), to the most unreflexive treasurers of cultural capital. The latter have the upper hand, since those who honor the legacy of 19th and early 20th century scholar-dealer Bernard Berenson have all the money. (Berenson was an assiduous student of the Morellian method. Evolved as a means of identifying criminals and criminal “types,” Berenson used it to recognize the authorship of medieval and Renaissance painters. [I'm wrong on this: thinking of Cesare Lombroso; but the very adaptable Morellian method was linked to detective work.]) So we all wander around the Hyatt Hotel here, a giant, incomprehensibly mazelike, interconnected complex.
Chicago, though, is the locus of numerous significant political cultural projects, and the gang rallied around this year, producing a number of talking events inside and outside the convention. At the thick of it was the group Temporary Services, and the north Chicago space Mess Hall.
I was snowed into New York and so missed the “shadow session” In fact, I missed my own session on autonomous education initiatives and their relation to art institutions. My co-chair had to fill in. Everything went well, they say. I hope so. It was arduous getting here (late), and I have been basically exhausted for days… But for me these conventions are always fun. And, since I am teaching art history again, they are a source of renewal of that basic disciplinary intelligence, such as it is.
Meanwhile, the “House Magic” zine catalogue is in proof – although we bound it backwards, so the first run is pretty unimpressive! Maybe it will be a collectible someday.
The table of contents is as follows: 1) Introduction – More “House Magic” Tricks; 2) Reflecting on the “House Magic” Project; 3) Barcelona: Fighting for “Thousands of Homes”; 4) Michel Chevalier at ABC No Rio, 2; 5) Last Call Hamburg in New York (Frise Kunsthaus); 6) Vincent Boschma, The Autonomous Zone/de Vrije Ruimte (Amsterdam); 7) Bullet Space: “The Perfect Crime” (NYC); 8) Telestreet: Pirate Proxivision (Italy); 9) El Patio Maravillas Turns a Corner (Madrid); 10) Christiania: Survival of the Interesting; 11) Christiania: How They Do It and for How Long; 12) Scandinavian Bulletins; 13) NYC’s Picture the Homeless Goes to Budapest; 14) AK57, Budapest; 15) The Story of Villa Milada, Prague; 16) Rozbrat Squat, Poland; 17) Greek Bulletins; 18) rampART, London; 19) SQEK: Squatting Europe Research Agenda; 20) Andre Mesquita, Real-Time Action in Brazil.
I hope to have it printed by the end of the month. It may still happen – there is nothing much more to do but pay for it. Pretty much the same day it goes to press, the PDF will go online at the HM:BFC website. The archive show remains up at Basekamp in Philadephia (see previous post). No events are yet scheduled.
picture: the "key" in the Reuben Kincaid Realty office window, Bridgeport, Chicago, 5/09 (pic by me)
Posted by Alan W. Moore at 6:46 PM