I am back on the road this year. It began in Paris last week, the first leg of a year´s journey to re-explore the art of squats in Europe. Does that sound wild? I forgot to pack toothpaste, however, and European pharmacies don´t seem to stock travel sizes of anything. My insistence on buying a small tube of what might serve to clean my teeth – anything bigger you must throw away in security check-ins – led me to mistaken purchases: dry mouth gel in a Spanish airport (may someday be useful?), and denture adhesive near my hostel in France (“English spoken here”; well, not really). That brushing was the most danger I was in the whole trip. The anarchists, sans papiers, leather-clad punk moshers, drunken hostellers, pickpockets, confused students, suspicious squatters, chattering academics and importuning artists didn´t bother me at all. I was making my own trouble. I was lucky to get the brush out of my mouth. 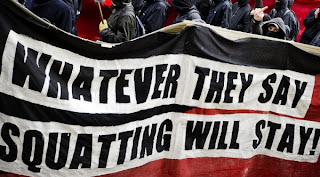 I´ll call the Paris SqEK meeting of March ´13 a spectacular success – or, as it should be, anti-spectacular. We learned so much, saw so many places and heard so many stories some of us experienced blank attention passages, a kind of waking sleep where you know someone is telling you something interesting but all you really understand is that their mouth is moving and some sound is coming out. “Oh! What?” (Much of this week was recorded, of course, but it may take years to sift through all that real-time data in English and French.) It was an adventure: a five-day event that was at once scholarly, exciting, exhausting, passionate, enlightening, dehydrating, cold, ridden with gremlins, and politically effective. Also shot through with moments of rare beauty.
The show began in the garrett of Sciences-Po, a maze-like school of conjoined buildings. (They are real antiques, and thus have some excuse; for these confusing disjunctive passages clearly inspired the modern architects of numerous U.S. public university buildings.) Beneath the massive exposed oaken beams of the named attic meeting room, the SqEK group gloated over their first book, “Squatting in Europe.” Boxes of the Minor Compositions/Autonomedia title had been hand-carried from London by a few people who thereby sacrificed their luggage allowances, and had to wear the same clothes all week.
I brought the last proof of the new “House Magic” #5, along with copies of all the other issues. They evaporated into the crowd, and I was only paid for one. Even so… I grouse all the time about the inconvenience of making zines on the run. This #5 was a typical nightmare – I spare readers the hairy tale of my last-minute rush to Barajas airport with copies for the meeting… Even now I type this in a copy shop that is moving on tortoise time, yada yada. But as Edward of “Using Space” zine reminded me, print copies pass from hand to hand. They have a material reality, hand-made items with a kind of gritty integrity which items with slicker production values do not have. They are literal building blocks of the movement. Still, in the future, if they don´t contain hand-made editioned prints, I don´t want to mess with them any longer.
The beloved “squatter priest,” Frank Morales, arrived from New York with his partner Vanessa, bearing a passle of propaganda, including rare issues of Chris Flash's newspaper “The Shadow,” catalogues from the Bullet Space squat art gallery, flyers from the MoRUS (Museum of Reclaimed Urban Spaces), and silkscreened posters by Seth Tobocman.
After back-slapping and book signing, the conference began. Miguel Martinez described his conception of the “action research” collective which is SqEK -- “Qu'est-ce qu'un collectif de recherche-action?” (While his consideration is very well worked out (it is mostly drawn from a longer text), it strikes me that the operations of such a group – SqEK fr´instance – generate results that are unforeseeable. Well beyond the “observer effect,” or “participant observation,” “action researchers” or militant researchers (a self-conception I feel that SqEK has yet to fully embrace) are highly active agents. Gone is the academic fig leaf, the positivist pretense of scientific objectivity. (The real-world corollary is that many such researchers are ejected from the multiply compromised academy: “Don't let the door hit you…”) It´s the difference between making ripples in a pond, disturbing a system by your research activity, and driving a car into it.
After Miguel, conference co-coordinator Hédiman spoke about the Intersquat festival, an annual opening of the doors of the art squats in Paris. The festival began as a collective response or follow-along to a show at the new-fledged Palais de Tokyo museum around the year 2000, then under the directorship of Nicolas Bourriaud. The squatters of Paris were invited to show in whatever manner they wished. The “art squatters” and their political compatriots are nothing if not multi-various and contentious, so this project generated a lot of noise and heat. (The theorist Jean-Claude Moineau weighed in on this with a text then, and talked about it when I met him with Michel Chevalier in 2010, although my French is such that he might as well have been talking to a tree…) Hédiman has bravely soldiered on working on the organization of these festivals, besides catching more than his share of tomatoes in the face because of it. Next, Fulbright fellow Jacqueline Feldman spoke of her encounters with Paris squatters. She´s been blogging a lot of it. (Jacqueline also did a lot of translations throughout the week, for which she has the heartfelt gratitude of all us French-less.)
When the first day´s talking concluded, the indefatigable Hédiman took us on a squatter´s dinner – down to a food court near the Seine, where we bought chain-store vegetarian slop and beers at a supermarket. About a dozen hardy souls encamped in the cold on the stony banks of the river in the veritable shadow of Notre Dame cathedral. We waved at the tourists riding squat wide boats as they came surging up the Seine, blasting the night with their bright lights. (The passengers aboard seemed more interested in us than the cathedral.) A drunken guy joined us, and cadged a beer (or two). I felt as if I were following in the clammy footsteps of Guy Debord during the days of the derives… After that – well, I forget. Besides, we´re going to Athens tomorrow morning, and I can´t spare anymore time to write.
To be continued…

“Using Space” zine can be found at:
http://northern-indymedia.org/zines/2656
Jacqueline Feldman wrote of the Jeudi Noir group at:
http://www.theatlanticcities.com/housing/2013/01/pariss-power-squatters/4480
snap quote: “'I recognize property rights, but I don’t recognize the right to do nothing with one’s property,' says Gauthier Caron-Thibault, councilor to the city of Paris and a member of Hollande’s Socialist Party.” She also blogs at:
http://jacqueline-feldman.com/
Image from squat.net of UK squatters' demonstration against the recently enacted criminalization law.
Posted by Alan W. Moore at 6:34 AM