Your Summer Plans May Include Hippies: A CFP 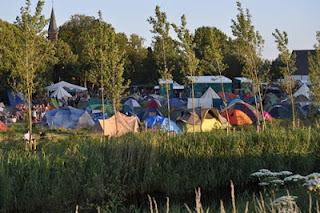 UPDATE: The dates have changed; noted below. The schedule has been announced; it is pasted at the bottomm of this post.
From 22 to 25 July this year, the free city of Ruigoord will hold their 3rd “Futurological Symposium on Free Cultural Spaces.” This coincides with the opening of the embassy of Christiania, the sister free city in Copenhagen, and a 40th anniversary celebration of Ruigoord. From the 26th to 29th, the community will host the annual Landjuweel festival.
This year's events celebrate the 40th anniversary of Ruigoord as a free cultural space. The organizers write that the climax of a year of activities will be “on the week before and the week after the 24th of July; the day the village was squatted.”
“Ruigoord has contacts with important free cultural spaces in Europe such as Christiania in Copenhagen, the UFA factory in Berlin, [the abandoned city of] Doel near Antwerp in Belgium, and the Boom festival in Portugal. Ruigoord has opened an embassy in Christiania, a consulate in Doel and has appointed an ambassador in the U.S.A/Canada. On top of this Ruigoord is part of the Cultural Fortress (Stelling) of Amsterdam; i.e. a network consisting of 30 free cultural spaces in and around Amsterdam.”
The symposium continues the work of two earlier symposia on free cultural spaces in the Netherlands which preceded the Landjuweel festivals of 2011 & 2012 in Ruigoord. The organizers invite participation in the upcoming symposium. The broad themes are “connection, collaboration and continuity.”
“We seek a number of speakers who are willing to approach the subject of the relevancy of Free Cultural Spaces from a global and a local perspective from different angles, or disciplines if you like (philosophy, futurology, entrepreneurism, politics).... The programme also includes a discussion on what the possibilities are for collaboration on a national, European and global level.”
If you are interested, please contact: ruthbader@hotmail.com with a cc to: symposium@ruigoord.nl.
Organizing committee: Rudolph Stokvis, Hans Plomp, Aja Waalwijk, Ruth Bader, Michael Kamp, Peter van der Wel, Rita Brakel, Gerben Hellinga.
Ruigoord online
http://www.cn20101172.p-client.net/index.php?pid=1

the free city of Christiania
http://www.christiania.org/

"The Doomed City of Doel"
http://www.atlasobscura.com/places/doel

photo by Monique Buurma of the Future Reggae festival encampment at Ruigoord, July 2011
Dear friends,
Sadly, we have to announce that Ruth Bader died. She did most of our mailings, so we ask you to send further correspondence c/o symposium@ruigoord.nl. We also want to point out that one date mentioned in the first invitation was incorrect. The reception for guests will be on Monday the 22nd of July 2013 at around 17.00 o’clock (5 pm Amsterdam time).
Questions: In view of sleeping arrangements, how many people will be coming with you and how long are you intending to stay? Could you tell us briefly what the topic of your presentation will be: will it have a theoretical or a practical focus?
Here is a preliminary program, including some points of attention that we’d like you to address: Monday July 22nd: Formal Guest Reception.
Tuesday July 23rd: The practice of free culture.
Points of attention: Past, present, and future of the community: historical coincidence, geographical setting, development of internal politics and the relationship to the outside world, the problems and opportunities.
Wednesday July 24th: The theory of free culture.
Points of attention: What does free culture have to offer to society? Creating free space, temporary/permanent autonomous zones; colonization, encapsulation of free culture through governmental legislation.
Thursday July 25th: opening of the Axis Mundi and the Christiania and North American embassies.