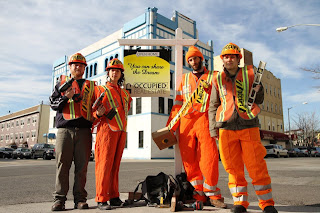 Yes, the Squatting Europe Kollective is meeting in New York this month. We're hoping to be historic.
The schedule is posted at: http://sites.google.com/site/housemagicbfc/sqek-nyc-feb-12-schedule
And pasted here:
SQEK NYC 2012 description LITTLE

For the first time ever, a group of activist researchers from the European squatting movement are gathering in New York City. They will make public appearances to speak about the decades-old movement of squatting and building occupations in their respective countries.

Generations of activists have participated in occupations of vacant buildings in Europe, beginning in the 1970s. The best known early success was the famous “free city” of Christiania in Copenhagen. But every major city in Europe has experienced some version of politicized squatting, most recently in the form of social centers.

The members of SQEK – Squatting Europe Collective – have gathered for special sessions at the Association of Amerian Geographers' annual convention February 24. A public discussion, meetings, film and graphic arts exhibition are among the other activities planned for the meeting,

Squatting and Social Centers: Resistance and Production of Critical Spaces I
(5 sessions, 8am-6:20pm) in Nassau A, Second Floor, Hilton NY
Note: Single session costs a lot of money, but you can probably sneak into this room which we have all day. Look like you belong there; it will be a radical egghead party...
8:00 AM - 9:40 AM – Participants: Miguel A. Martinez (University Complutense of Madrid/CSOA Casablanca) and Lucy Finchett-Maddock (University of Exeter), Pierpaolo Mudu (University of Rome/Forte Prenestino), Hans Pruijt (Erasmus Universiteit, Rotterdam), Loredana Guerrieri (Osservatorio Di Genere, Istituto Storico Della Resistenza, Macerata, Italy), Matthias Bernt (Leibniz Institute for Regional Development and Structural Planning, Leipzig)

5. Saturday, February 25th, afternoon/evening – Public presentation: “Squatting in Europe: Prospects and Perspectives” (Living Theatre, 21 Clinton St half a block below Houston Street, 5-7pm; ends on the dot of 7pm)
Public presentation by members of the Squatting Europe Collective (SQEK)
“Squatting in Europe: Prospects and Perspectives”
A roundtable with the members of SQEK
Generations of activists have participated in occupations of vacant buildings in Europe, beginning in the 1970s. The best known early success was the famous “free city” of Christiania in an abandoned military base in Copenhagen. By now nearly every major city in Europe has experienced some version of politicized squatting. Often this takes the form of the social center, occupations of large buildings which are organized to provide cultural, political and social services, usually for free.
For the first time ever, a group of activist researchers from the European squatting movement are gathering in New York City. They will make public appearances to speak about the decades-old movement of squatting and building occupations in their respective countries.
The tradition of political squatting is moving from the shadows into the light. With the world-wide rise of the Occupy movement, the deep reservoir of experience within the movements of political squatting have become suddenly significant.
Confirmed participants in a roundtable public presentation are: Miguel Martinez, Elisabeth Lorenzi (Madrid, Spain), Hans Pruijt (Rotterdam, Netherlands), Gianni Piazza (Sicily), Eliseo Fucolti (Rome, Italy), Thomas Aguilera (Paris, France), Lucy Finchett-Maddock (United Kingdom), Lynn Owens, Tina Steiger (Copenhagen/USA), Alan W. Moore (Madrid/USA)

The aim of this session is to bring together different perspectives concerned with the experience of squatting as practice of resistance and space of political engagement. Specifically, the session will focus upon, and solicit papers on five main themes:

1) Long and medium term structural factors that make squatting possible (or constrain it)
2) Analysis of “conflicts” and “dynamics.”
3) Social Centers/Squats’ networks, politics and culture
4) Empirical case-studies and comparative perspectives to squatting
5) Novel theoretical, cross-disciplinary and empirical approaches for the study of squatting

Several questions are relevant and worth discussing:
- what different kinds of experiences of “political” squatting exist?
- what kind of political, or post-political, labels meaningfully describe coalitions and solidarity between social networks resisting various forms of neoliberalism?
- how can academics facilitating such spaces?
- what kind of alliance can be built between squatters and political parties, trade unions, environmental activists, peasant movements?
- how is the LGBT movement involved with squatting?
- how do legalization and institutionalization affect squatting?
- are social centers utopic? heterotopic? or...
- how do modalities like Critical Mass, music and art events and demonstrations function in social centers?
- what is the relation between the physical space of the social center, and the cyberspace of the hacklab?
- what are the relations between squatting, community gardens and alternative systems of food production?

(Photo from http://notanalternative.com)
Posted by Alan W. Moore at 2:21 PM