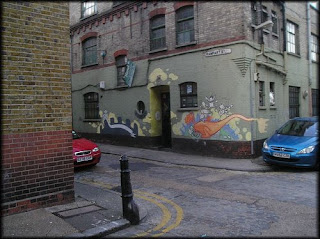 I was invited to talk at the Ramparts Social Center in East London by Peter Conlin, a Canadian graduate student who is closely involved with the space. Ramparts is a solidly built 3-story warehouse with a café on the ground floor, gallery and offices on the 2nd, and 3rd floor offices. The night I spoke saw a hot night of action for a traveling art show called “The Archetist,” based on a psychological cyberpunk story about a psycho-architect who analyzes nomadic buildings. Despite the wacky costumes and fringe-type theatricale, the content made the work seem very appropriate to present in a social center. The effort was somehow removed from its fan fiction context into a wider zone of social significance by being held in a space that has exhausted its appeals and hangs perilous awaiting eviction. Why the bailiffs haven’t come is a mystery… Their forbearance is attributed to “the crisis; it costs money to stage an eviction, and then some more to seal the building.
I spoke in a rambling way about my work researching artists‘ collectives. I was pleased to see Nils Norman showed up with a friend for the first part. After my talk I had interested albeit brief conversations with Rampart people -- the place was bone-chillingly cold… A fellow also named Alan told me of Area 10, an artists’ project space in Peckham, that is producing a big event Sunday. It is a factory building with artists’ studios. They have stopped paying rent because of lack of services.
Alan introduced me to a friend who had organized a Pirate University project in Barcelona. (I regret his name escaped me.) They staged a talk on Jacques Derrida’s concept of nothingness while seated on chairs in the middle of a street in London. It sounded like the perfect combination of post-structuralism and activism, mixed to the pitch of absurdity. He lamented the fractious nature of squatters ni Barcelona, saying there was no unity -- two years ago it was better, he said. Oddly enough this was precisely what Alan was saying to me earlier abuot London. “Network is coming,” wrote the organizers of the social center conference in January, but it seems it may have to clamber over the fractious tendencies of autonomists worldwide. [Next: A visit to Queen Mary.]
Posted by Alan W. Moore at 3:51 AM